Does anyone still read this thing? I've had a hankering to write but only if there's an audience out there somewhere to read it.

If you put words down in cyberspace and there's no one there to read them, did you actually write anything?

I remember when I was young, I had an old hand-me-down clock radio that was my dad's. It probably had some tubes in it because it took a few seconds to warm up when you turned it on. I would listen to WJR, 760. "The Great Voice of the Great Lakes". I listened to it because it was the station that dad listened to. J.P. McCarthy in the mornings, Budd Lynch and Bruce Martin announcing Red Wings games in the fall and winter, and Ernie and Paul Carey announcing Tiger baseball in the spring and summer. I listened to that old radio for many years. The funny thing was that I really didn't care that much about baseball; I mean, I knew as much as any lay person did about the Tigers but I didn't know their roster or who was on a streak or who was in a slump.

What I did know was Ernie's voice. There was something soothing and comforting about it. It was almost always even and calm, always in control. Even when there was a big home run that brought the Tigers from behind, his voice rose and fell as the ball went out over the field and into the seats. Ernie would comment that a gentleman from Brighton took that one home. I was always amazed how he knew these things. I asked my dad who in his own infinite wisdom and sense of humor said that Ernie had a chart of the seats with all that information on it. When a player, Tiger or opponent, would watch that third strike zip by without a swing Ernie would comment, "He stood there like a house by the side of the road and watched that one go by."

When I found out that Ernie had passed away tonight, it was as though a beloved uncle had died. I'm positive that I'm not even remotely alone in this feeling. Even as I saw another mention of his passing between periods of the hockey game, I could feel tears in my eyes. I was watching a You Tube video of his farewell address at Comerica Park and as I was watching it and listening to his still-strong voice, I heard the lawn mower outside and again I was transported back. Suddenly the old yellowed clock radio was there next to me and the sounds of the freeway were filtering in through the open window of my bedroom and in the fading light of the evening, just as tonight, the sounds of the lawn mower getting louder and softer as the path took it up and down the lawn. And there, in both places, the voice of my youth and my summers and my nights told us it was a beautiful evening in Tigertown. And in that moment, however brief it was, life was good and right and a man from New Hudson was taking home a souvenir.

Thank you Ernie. Thanks for everything.

53 year old Phil Harris, captain of the Alaskan fishing vessel Cornelia Marie and one of the most popular characters of the Discovery Channel show "Deadliest Catch" died this morning, less than a week after suffering a massive stroke. 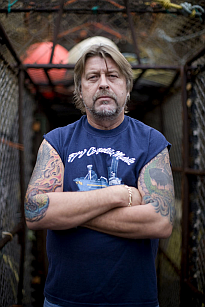 May your crab pots always be full, Captain Harris.

Note: I think I've posted this on LJ before but, thanks to LJ's *awesome* (not) search feature I couldn't verify it. So I updated the information in it and (re)post it here. Enjoy.

We define our interpretation of history by the times in which we live. The history of the Second World War, while remaining static in terms of the events and persons involved, is interpreted very differently today than it was in 1980. In 1980, it was different still than it was in 1960. Today's interpretation of World War II seems based primarily in the effort to portray the Nazis and Japanese as terrorists. Sound familiar?

I can't help but wonder, as I read (and read, and read) what the interpretations of World War II will be in 2020 and again in 2040. I would think by 2040 there will only be a very very small number of actual veterans left. (It seems entirely plausible that there will be World War II veterans still alive 100 years later, given the advances in health care that will occur.) Because the number will be so small, the interpretations will be through a smoked mirror. No longer will we have the direct input of the veterans to draw from. There will be an enormous corpus of information, to be sure, but there will relatively soon be no one to ask who was actually there.

According to Wikipedia there are (as of 10 December 2009) 3 verified World War I veterans (with one unverified veteran and one WW I "era" veteran) still alive. All of the veterans are from the Allied Powers. The last Central Power veteran, Franz Künstler of Austria-Hungary, died at the age of 107 on May 27, 2008. This is some 95 years after the beginning of the war in 1914. There are about 2.5 million U.S. World War II veterans living today, 68 years after the beginning of American combat activities on 7 December 1941.

But I digress. I started writing to ponder the view from the future upon the past. If we are fortunate enough to emerge from the present era in one piece and as a continuing world power, the view on the past will again reflect the situation of the contemporary time. As today we interpret WW II as largely a war on terror, perhaps the future will interpret it as a just action to allow oppressed populations facing genocidal extinction their guarantee of survival. If the United States emerges from these times as a faltering First World nation on the brink of entering Second World status, perhaps historians will interpret World War II as the last great period of American history. After that came our steady decline to secondary importance on the world's stage.

History is subjective. It is written by the winners, to be sure. But it continues to be rewritten and reinterpreted by those who succeed -- or defeat -- the winners who came before.

The uniforms and equipment have changed but the mission remains the same as does the shared brother and sisterhood.

The Military Police of the Vietnam War from Jim Stewart on Vimeo.

If these walls could talk
Would you rent or buy the home of your dreams if a brutal murder had taken place there? What if you got to live there rent-free? Would you think twice if neighbors warned you that it was haunted?
Reply 460

I see nothing wrong with any of these options. Apart from the curious-passers-by syndrome that would inevitably happen, it doesn't seem like a bad thing.

Rent-free is a great bonus.

One of the best tributes, certainly the best amateur one, I've seen to The Fitz. Combines Lightfoot's song with video and stills of the boat and audio from the Arthur M. Anderson, the freighter that was 10 miles behind and the last to communicate with Captain McSorley.

29 good men went down with the flagship and queen of the Great Lakes fleet. She was graceful and beautiful and a feather in any crewman's cap who served on her.

The legend lives on from the Chippewa on down
of the big lake they called "Gitche Gumee."
The lake, it is said, never gives up her dead
when the skies of November turn gloomy.
With a load of iron ore twenty-six thousand tons more
than the Edmund Fitzgerald weighed empty,
that good ship and true was a bone to be chewed
when the "Gales of November" came early.

The ship was the pride of the American side
coming back from some mill in Wisconsin.
As the big freighters go, it was bigger than most
with a crew and good captain well seasoned,
concluding some terms with a couple of steel firms
when they left fully loaded for Cleveland.
And later that night when the ship's bell rang,
could it be the north wind they'd been feelin'?

The wind in the wires made a tattle-tale sound
and a wave broke over the railing.
And ev'ry man knew, as the captain did too
'twas the witch of November come stealin'.
The dawn came late and the breakfast had to wait
when the Gales of November came slashin'.
When afternoon came it was freezin' rain
in the face of a hurricane west wind.

When suppertime came the old cook came on deck sayin'.
"Fellas, it's too rough t'feed ya."
At seven P.M. a main hatchway caved in; he said,
"Fellas, it's bin good t'know ya!"
The captain wired in he had water comin' in
and the good ship and crew was in peril.
And later that night when 'is lights went outta sight
came the wreck of the Edmund Fitzgerald.

Does any one know where the love of God goes
when the waves turn the minutes to hours?
The searchers all say they'd have made Whitefish Bay
if they'd put fifteen more miles behind 'er.
They might have split up or they might have capsized;
they may have broke deep and took water.
And all that remains is the faces and the names
of the wives and the sons and the daughters.

Lake Huron rolls, Superior sings
in the rooms of her ice-water mansion.
Old Michigan steams like a young man's dreams;
the islands and bays are for sportsmen.
And farther below Lake Ontario
takes in what Lake Erie can send her,
And the iron boats go as the mariners all know
with the Gales of November remembered.

In a musty old hall in Detroit they prayed,
in the "Maritime Sailors' Cathedral."
The church bell chimed 'til it rang twenty-nine times
for each man on the Edmund Fitzgerald.
The legend lives on from the Chippewa on down
of the big lake they call "Gitche Gumee."
"Superior," they said, "never gives up her dead
when the gales of November come early!"


I recommend a trip to the Great Lakes Shipwreck Museum at Whitefish Point for anyone who would like to see the sometimes deadly history of the Great Lakes.
Collapse